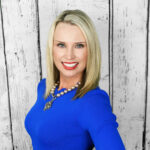 For more than 23 years Kelly has built her award-winning, highly-respected career as a VP and Certified Mortgage Planning Specialist on earning the trust of her clients and partners by providing honest, well- communicated and knowledge-based lending experiences! Kelly’s unmatched level of personal service, commitment to education, and client-centered approach has led her to receive top-level production awards for the last 16 consecutive years. She is ranked in both Scotsman Guide & National Mortgage News Magazine as a top producer in the nation and has also received the 5-Star Mortgage Professional Award for the last 6 years in a row. Her success is second to the pride she feels for helping her community realize the dream of home ownership. To help educate the community, Kelly has a thriving YouTube channel aimed at providing both real estate agents and consumers important information about home lending.  Kelly has been featured on the cover of Top Agent Magazine and appeared on national television in a special segment during 2 episodes “Designing Spaces” on Lifetime TV. She is currently the local host of the American Dream TV show in the Phoenix/Scottsdale Market and is featured weekly.